Hunker Down: Mie Hørlyck Mogensen and May Wilson

Bass & Reiner Gallery’s current two-person sculpture show Hunker Down, featuring work by local San Francisco artist May Wilson and Danish artist Mie Hørlyck Mogensen, offers a study in the material qualities that imbue an object with personality and pathos. The two bodies of work balance a deflationary, semi-pathetic humor with surprising empathy evoked by simple, semi-anthropomorphized sculptures that seem to be trying hard to become animate.

Mogensen goes so far as to give her sculptures names: a “body guard” resembling a punching bag battened to a wall from which it seems to be trying to escape; “coast guards” made of vinyl are anchored to the floor of the gallery by their own weight like sandbags; and “optimists,” which are small pieces made of hardware and glazed ceramic that threaten to undo the protective weight of the guards. One hanging from the ceiling (Optimist [kissing ceramic], 2016) even moves, uncannily in every sense of the word, with a breeze that comes in through an open window.

Where Mogensen’s characters take on tropes of responsibility (in the guards) and anarchy (in the optimists that seem to fight against their control), Wilson’s sculptures playfully embody human awkwardness and self-consciousness in the form of humble materials that wouldn’t be out of place in a children’s art class. Made of tall vertical tubes, Wilson’s larger sculptures are coltish and vulnerable, as though going through growth spurts. These are sculptures-as-children, or sculptures-as-citizens under a nanny state, only some of which will remain docile.

Much of the overall off-kilter effect of Hunker Down can be attributed to the play between the materials: poured concrete, vinyl objects evoking gym medicine balls, contrasted by soft layers of padding that take up tropes of childproofing. Both artists use industrial straps in their work, indicating both stuckness and safety—and the suggestion of a future insurgency. The installation activates the gallery’s bizarre, almost cartoonish new space in the recently opened Minnesota Street Project; a wildly slanting ceiling and giant window on one wall make the work appear surreal, as though even half-animated cartoons might come alive the moment our backs are turned. 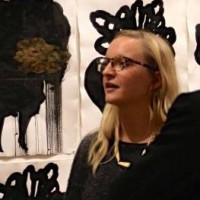